I do! And they’re so good for you especially if you make them yourself. They can do wonders for maintaining healthy gut bacteria which is crucial for digestion and a host of other functions.  It’s so easy too. If I can do it, anyone can! I made 2 jars a few weeks ago and have been eating one almost every day.
Here’s how:

If you don’t want to ferment your own pickles, bunt want a delicious pickle meal, try these Pickle Sliders! 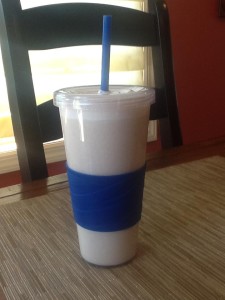 I am a huge fan of vegetables- just like many of you. I chose to write to you today about Kale and Cauliflower not because they are my favorite vegetables (I would be hard pressed to pick a favorite veggie!), but because I recently tried 2 new recipes that I found in Clean Eating Magazine that I really enjoyed, and as you might have guessed, featured them. When I realized they started with my initials, I figured that was a “sign” that I should share them with you. (lol) Before I get to the recipes, I would like to give you some of the great stats that both kale and cauliflower can boast.

Kale- is a dark, leafy “super” green, which has found its way to the top of the list of the healthiest foods around. I have heard it referred to as “Mother Nature’s multivitamin”. It’s plentiful in the essential vitamins A, C and K as well as the minerals copper, potassium, iron, manganese and phosphorus. Not only that, a small 1 cup serving has 3 grams of protein and only 40 calories. Not too shabby. I think Popeye needs to trade in his can of spinach for a cup of kale! In comparing kale to spinach, one cup of cooked kale has 1000% more vitamin C than a cup of cooked spinach- and is more absorbable in the human digestive system. This nutritional powerhouse not only plays a role in skin, hair and bone health, it has the potential health benefits of improving blood glucose control in diabetics, lowering the risk of cancer, high blood pressure and the development of asthma. On top of all these benefits, it tastes great.

Cauliflower- is a white food that breaks the rules! In our quest to eat healthy we are told to avoid white foods. No white sugar, flour, rice, pasta… You don’t want to put cauliflower on that list. It is replete in nutrients, including vitamins, minerals, anti-oxidants and other phytochemicals. This nutritional superfood can boast the following benefits: cancer fighting, improve blood pressure and kidney function which lead to better heart health, improve brain function- learning and memory, anti-inflammatory, good source of dietary fiber to boost digestion, and aids the body in detoxifying. Wow. Why would you want to avoid it? Not only does it boast all those benefits, it is versatile. You can eat it raw or cooked, as a snack or part of a hearty meal.

The following recipes, adapted from the April 2015 issue of Clean Eating, not only include these two superfoods, they include chickpeas, tomatoes and quinoa. I have a lot to say about those foods also but will save that for another day. With all these great foods included in these side dishes, you get a lot of bang for your nutritional buck and they taste delicious!

As a side note, this is a great way to incorporate quinoa into your diet if you are one of those that does not like the texture of it. The texture completely changes when made like this. I also enjoyed this more at room temperature, not hot off the pan.

Everyone is always looking for quick, healthy and satisfying breakfast ideas. It’s what gets you going in the morning so we want to make sure its healthy but we are also always on the run. Below is a simple, yet fabulous, recipe idea for a make ahead breakfast when time is a factor.

“I scramble 6 eggs and then mix in finely chopped broccoli (you can also add peppers, asparagus- whatever veggies you would want in an omelet), I add a little home made whole wheat breadcrumbs so it keeps the shape a little better- like less than 1/4 cup and then pour the mixture into a cupcake tray that has been sprayed with cooking spray. It fills 7 if you add a lot of veggies. I sprinkle a little cheddar cheese on the top. Cook them on 300 for 20 minutes and you end up w mini omelettes that you can reheat easily. You can also make more at a time and freeze them. They are really good!” 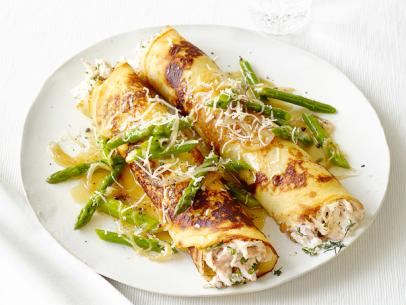 Directions
1. Preheat the oven to 425 degrees F. Butter a large baking dish. Combine the chicken, ricotta, 1/2 cup parmesan, 3 tablespoons herbs, 3/4 teaspoon salt and 1/2 teaspoon pepper in a medium bowl. Spoon about 1/4 cup filling across the lower half of each crepe; roll up to enclose the filling. Place the crepes, seam-side down, in the baking dish. Cover with foil and bake until the filling is hot, about 15 minutes.

2. Meanwhile, melt 3 tablespoons butter in a skillet over medium-high heat. Add the shallot and cook until it softens, about 1 minute. Add the asparagus and cook until just tender, about 3 minutes. Add the chicken broth, lemon zest and the remaining 1 tablespoon herbs and simmer until the sauce is slightly thickened, about 2 minutes. Stir in the remaining 1/4 cup parmesan and season with salt and pepper.

3. Divide the crepes among plates, top with the asparagus and sauce, and sprinkle with parmesan.

Directions:
1. Preheat the oven to 375 degrees F. Mist a baking sheet with cooking spray. Grate the carrot and 1/2 onion into a large bowl. Add the chicken, panko, 2 tablespoons hoisin sauce, the ginger, 3 teaspoons soy sauce and 1 teaspoon sambal oelek and mix until combined. Shape the chicken mixture into 4 patties and place on the prepared baking sheet. Bake until cooked through, about 20 minutes.

2. Meanwhile, thinly slice the remaining 1/2 onion. Toss with the mushrooms, sesame oil, lime juice and the remaining 1 teaspoon soy sauce in a bowl. Mix the remaining 2 tablespoons hoisin sauce and 2 teaspoons sambal oelek with 1 tablespoon water in another bowl.

3. Warm the hamburger buns in the oven. Serve the burgers on the buns with a drizzle of the hoisin-sambal sauce and some of the mushroom mixture.