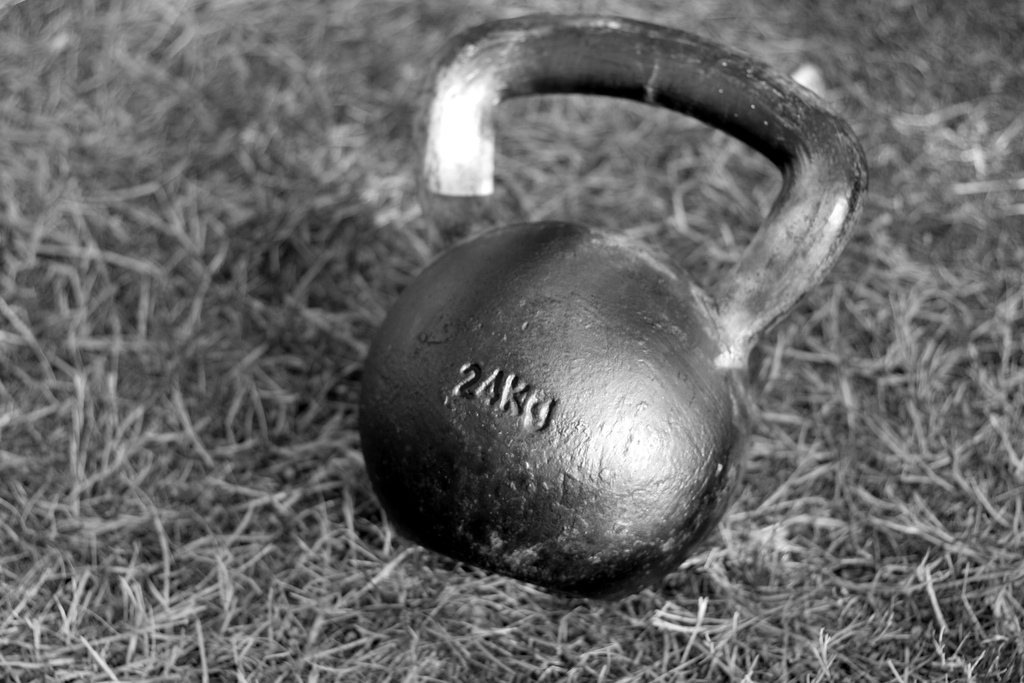 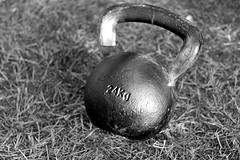 The kettlebell, what is that ancient looking thing? That’s a question many people who have never worked with kettlebells ask themselves when they first see one. The kettlebell is a primitive and intimidating looking exercise tool to those who are unfamiliar with them, basically a cast iron cannon ball with a handle. In this age of technology it’s very often overlooked in favor of something we can plug our iphone into and upload to facebook. In the technology age it’s very hard to believe that something so simple can be so effective but the reality is that the kettlebell is by far one of the best fitness tools on the planet and has been for about 300 years. This is exactly why our Long Island personal trainers use them on a regular basis at our Long Island boot camp.

There is a bit of mystery behind the history of the Kettlebell regarding its origin and original function. However, what does seem to be clear is that kettlebell workouts are an effective and practical way to burn fat and develop speed, endurance, power, focus, and balance.  It’s believed that the kettlebell originated in Russia and most likely evolved from a poise, which was a weight that was used as a counterbalance on produce and grain scales. It’s been said that Russian farmers and fisherman began using these counterbalances to develop strength and weight-lifters began using them for strongman exhibitions.  Others believe the Russian military added a handle to a cannonball to make it easier for loading and soldiers consequently would use them for strength competitions. What we know definitively is that in the 1700s Russian strongmen used the kettlebell  or “girya” as it’s known in Russian for lifting competitions, the kettlebell actually appears in a Russian dictionary from 1704. From this time forward, the kettlebell has a popular history in Russia. It was indeed used by the artillery soldiers, the police, and laymen of the 18th , 19th , and early 20th  centuries and in competitive kettlebell lifting under the name Girevoy Sport starting in the mid 20th century. Eventually, the Spetznaz (Russian Special Forces) began using the kettlebell, because of its incredible results as a supplement to other military training. As is the case with many things in life what’s old becomes new again, and if it works, it works. Kettlebells eventually made their way to the states where they were adopted by the US Marines, Special Forces, FBI, and the Secret Service. And now our Long island personal trainers are using them at our Long Island Boot Camp!

So why is kettlebell training so beneficial? First off, kettlebells are far different from dumbbells and barbells and are not intended to be used in the same way. Unlike dumbbells or barbells the center of gravity of a kettlebell is distally placed thereby creating greater forces of inertia. In order to control the weight you must employ the use of multiple muscle groups along a kinetic chain, some isolation exercises done with barbells or dumbbells incorporate only one muscle group at a time.  With the kettlebell workouts we do at our Long island Boot Camp, two different actions must work together: resistance training and overall body movement. Most kettlebell movements are explosive and fluid requiring one to move through different planes of motion creating strength in each plane. The kinetic sequence of your body during a swing requires a series of joints to open and close passing explosive force to the next joint in the sequence. Isolation exercises improve only appearance but not functional abilities. The ballistic nature of kettlebell lifting challenges the muscles in a way that a cardio workout or a resistance workout alone cannot do.  Since kettlebell lifts can be a bit more complex then some other movements, our Long Island personal trainers teach them in our coaching intensive small group sessions.

Kettlebell training mimics natural human movement thereby making everyday activities easier and injury less likely. This is superior functional training at it’s finest. The body must work as a unit. Every lift with the kettlebell engages the entire body. Kettlebell movements are never a single joint movement. Every swing or lift engages multiple joints and muscle groups forcing the body to always work as a unified whole.  This is partly why our Long Island personal trainers are helping their clients burn so much fat. Ballistic movements with a kettlebell provide a unique challenge to the nervous system, the task associated with kettlebell training is complex using precise body movements which must be performed sequentially, and this requires intense focus on the movement. The result is improved coordination and mental focus which when coupled with physical challenge places stresses on the body and mind. Since the human body does not naturally like to be stressed it attempts to adapt with improved muscularity and flexibility and overall better preparedness for a multitude of situations.  By their nature, typical kettlebell exercises build strength and endurance, particularly in the lower back, legs, and shoulders, and will increase grip strength and greatly improve overall muscle and fitness.

Kettlebell training is actually more similar to high-intensity interval training (another one of our Long Island boot Camp favorites) rather than to traditional weight lifting.  Kettlebell exercises often involve large numbers of repetitions and may be repeated continuously for several minutes or with short breaks. In one Soviet study, kettlebell enthusiasts performing a 20 minute snatch workout were measured to burn, on average, 13.6 calories/minute aerobically and 6.6 calories/minute anaerobically during the entire workout which is equivalent to running a 6-minute mile pace. The benefits to ones stamina and muscularity as well as the fat loss benefits of kettlebell training are unparalleled.

As with any excersise program it is always best to seek the advice and counsel of a professional, kettlbell training is not for everybody and must be done properly to avoid injury. Seek out a qualified kettlebell instructor who can teach the proper execution of the movements, don’t expect any trainer to know how to properly use kettlebells. Our Long Island personal trainers are committed to learning the best kettlebell moves to teach at our Long Island Boot Camp.