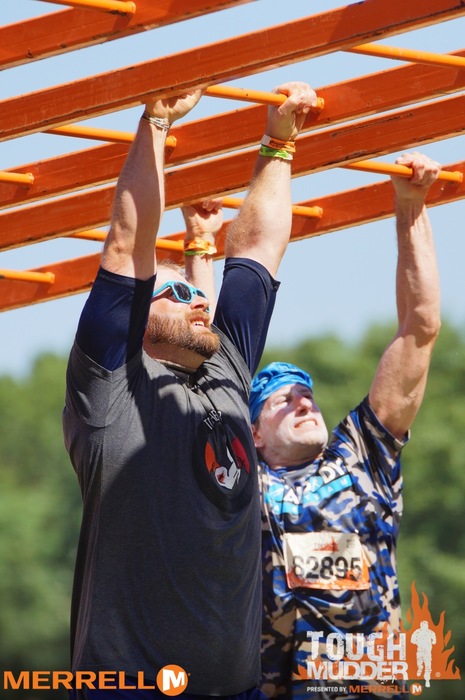 Me and four other guys did something for the first time on Saturday, the Long Island Tough Mudder.
It was a 10 mile run with 20 different obstacles, ranging from bear crawling

through a tube with giant water packs weighing you down to going across monkey bars suspended over muddy water. I had the following people on my team with me:

-Tony, a 38 year old UPS manager accustomed to long distance running but not with obstacles.
-JP, a school teacher around the same age as Tony and I.
-Ric, a 41 year old IT guy.
-Bill Powers, a TBBC Transformation coach and retired iron worker. Bill is a solid 20 years older than the rest of us.

Tony, JP, and Ric are all TBBC members so it was so cool running as a team together. I couldn’t be prouder of our crew for not only finishing but for working as a team and doing their best.

As I mentioned, this was the first time any of us had done a challenge like this.

I decided to do it earlier in the year to give myself a different type of challenge. I then began recruiting my all-star team.

As we were at the starting line getting ready to go, there was a Tough Mudder crew member there motivating us for the journey ahead. He said something that really resonated with me:

“When was the last time you did something for the first time?”

Unfortunately, many people get stuck doing the same things over and over. I think life’s meant to be lived with adventure. I’m not saying you should go and sign up for a Tough Mudder or skydiving but I’m sure there’s something you really want to do that’s just a bit outside your comfort zone. I urge you to make a decision to do it today.

Fill out my online form.
There are tons of Wufoo features to help make your forms awesome.